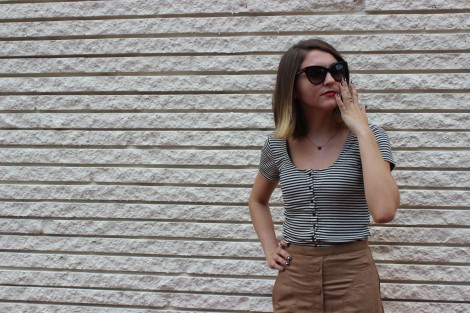 I skipped town for the weekend and headed deep into enemy territory. (I mean, I didn’t know it was serious enemy territory until it was too late, when I was promptly informed of the battle line crossing by my Uber driver.) Apparently, that whole ‘New York baseball team v. Boston baseball team’ rivalry is a big deal around here.

Luckily, he let it go and dropped me off at Lesleigh’s cornflower blue Victorian-style house for a weekend of catch-up and city ‘sploring. From there, (in all our adventure-seeking abandon) we hightailed it to a mall with air conditioning.

I was feeling a little ’70s style coming on, so I paired my new striped Brandy Melville top with a suede H&M skirt and my trusty all-white Vans sneaks. Oversize Marc by Marc Jacobs sunnies kept me snoozing on the train ride there, while my roomy Cole Haan bag stored the camera, phone, snacks, and Fight Club novel I’ve finally gotten a chance to inhale.

My fearless tour guide traversed the spindliest of cobblestone streets and very hottest cement pavements to take me to the best parks, museums, and storybook-setting historic districts Boston has to offer.

I did notice that the squirrels seem to be even more human-friendly than the certified crazy ones in Gainesville, as countless furry fiends scrambled up to our grassy patch to hangout. Thank goodness a gaggle of uncoordinated toddlers played nearby, thoroughly terrorizing the squirrels back into the treetops. 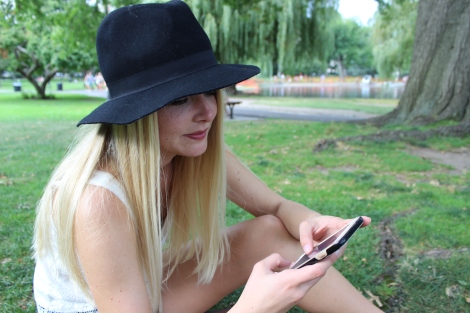 The first night was spent at an amazing restaurant called Lolita’s, where Lesleigh and I devoured tacos and queso. When the check arrived, a tall glass exploding with cotton candy (sprinkled with Pop Rocks) arrived along with it!

After recuperating at home, we headed to Improv Asylum, where we watched a few skits and crowdsourced jokes before sprinting back to the T (Boston’s subway system) in the rain.

My one request was that in my two-day stay, we made it to a burger shack, which Lesleigh promised would be no problem at all. A woman of her word, she delivered me to one of the tastiest burgers I’ve ever eaten (appropriately named Tasty Burger), where I ordered a side of fries and chocolate shake to round out the healthy main dish.On my last day, we tumbled through the heat to the North End, where we weaved our way through a busload of tourists in Quincy Market for raspberry and pear gelato and baklava, then further up a bumpy side street to indulge in the most decadent lobster rolls I’ve ever tasted. 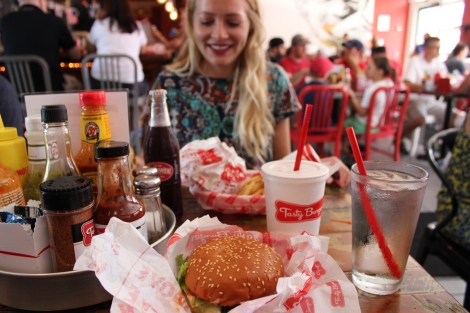 And what trip is complete without an impromptu photo shoot? Outside the Museum of Fine Arts, I sported my oversize Brandy Melville dress, Jeffrey Campbell black lace-ups, and a Son of a Sailor necklace.

Before I caught the afternoon train home, Lesleigh and I bopped along Freedom Trail to spot Paul Revere’s house. Around the corner, we even observed an 18th-century demonstration of chocolate making.

All in all, quite a lot to pack into a few days! But can’t thank my lovely guide enough for a local’s look into another big city life.

Hi! I’m Elly. A writer and editor from the Sunshine State, I've taken my sunny frame of mind to NYC. Follow me to keep up with my latest fashion musings!